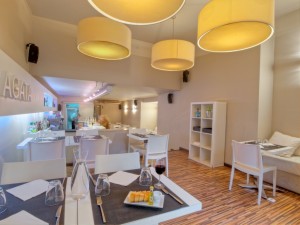 These pictures were for a restaurant that was creating a new website.

I got a call from a girl I know called Freddie, who is a designer and also runs a Meetup group for such people, I sometimes go along as it is a very relaxed social night out, rather than the typical networking events, which always feel a bit false and not unlike how I imagine  speed dating nights might be!

I basically had to get shots of the restaurant and also a party they were hosting.

Shooting a place like this is always going to be a tad awkward if its busy and of course the day I arrived this was the case; I wanted to do HDR postproduction, so ideally needed to use a tripod…

My favourite shot is the one I did when no people had arrived, I think the HDR is not excessive and brings a light touch to the image. The second part of the job meant coming back in the evening for the event, this was primarily about food shots so I had to work on the fly before people arrived getting what I could with an agile set up, this in the end involved a flash with a either bare head or basic diffuser and a ring flash for fill, I  was up very close with a lens that has macro capabilities so did not need to shoot wide open to get some decent shallow depth of field (a lot of people talk a lot of crap about how DoF is only really possible on full frame cameras; most of these were shot around f8 on a 4/3 sensor).

The lighting set up worked quite well and like I said was flexible enough to work quickly, as anyone who has ever worked in a restaurant knows things can get very stressful. luckily Lorien, the chef, was a great help.