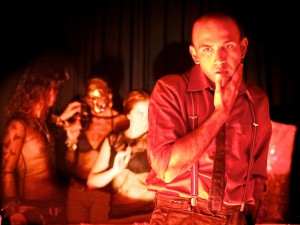 I photographed Julian Wickham for an interview piece and as is often the case it led to the chance to do some more work.

He runs a theatre group (The English Drama School) that teaches the craft to both native and non-native English speakers and they actually perform the plays for the public to go see in a very cool space in Barrio Gotico.

I was very happy to have the chance to get involved in this as I used to love doing theatre work back in London, in the days of film.

The play is his own reworking of ‘The Picture of Dorian Grey’, set in the 80s, with a photograph in place of a painting suffering the ravages of time and debauchery.

I went to do the dress rehearsals and quickly got the gist of the rhythm and the time flew by. Normally I do set pieces with flash, this, however, was much more agile and almost like street photography, very refreshing and great fun.

I took a lot of gear and also my new camera to try it out. What a revelation. I am amazed by the quality of the images and most were shot as jpegs as the camera was so new the RAW files couldn’t yet be used, since then this has changed and I even really impressed by what the RAW files could offer so may have to redo the post production on some of them.

Also this new camera is so discreet! Barely a whisper when pressing the shutter, and its size means it is perfect of such work of which there should be more; I intend to travel much lighter next time.