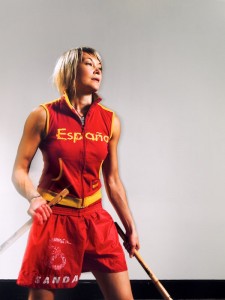 A very interesting person. Andrea loves all types of martial arts, and also has a really good boxing class that I now regularly attend.

Going to photograph her for the magazine was the first time I met her; I would say that now we are friends.

I did a variety of shots some with her waving those sticks very fast right up close to the camera, in the end I prefer this one, it is relatively static but I like her stance. As with all the interview shots the idea is to have quite a lot dead clean space around the person so they can run the text, this often means a compromise and I have taken to framing shots for the page and then doing others that I like. In this instance I think it works for both of us.

A couple of strobes were used for lighting, there was a lot of ambient too, which helped get some movement in the shots, not so obvious in this one. The good thing about these interview shoots, is meeting people and the chance to find future clients, pictures from this shoot showed up in a couple of other magazines around the world.