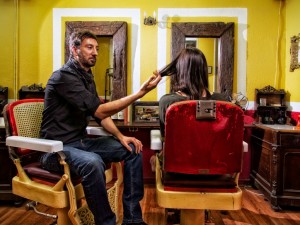 I went to photograph Anthony whilst still recovering from a stomach bug that had been doing the rounds of the city. I was feeling very light-headed and generally not ‘all there’, I did however have an idea in my mind as to what shot I would like and when you are lucky enough to have this, it can make taking photographs that little bit easier; you have to all intents and purposes solved the creative puzzle and now its just a matter of technicalities and perhaps ‘shoe-horning’ the reality of whats possible into the form you had in mind.

Funnily enough Anthony had only just recovered from the same bug so was either being sympathetic or he too was still slightly delirious (trust me, after this bug you lose so much water, etc, in such a short space of time, it is like a natural high).

The shoot turned out to be good fun and though there are a couple of things  I might have done differently, on the whole I quite like the result. I was determined to not do a traditional portrait and knew I would like to get him sat next to a model and do something with her hair. The space we choose had a nice symmetry which I tried to use, space was very limited though and I was pressed up against the back wall trying to get them both in and having viewing the image on the LED screen, which luckily on the EM-5 flips out.