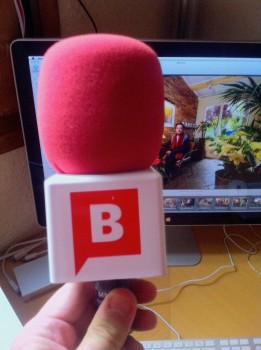 I got interviewed by a local TV company.

It might seem churlish or fake modesty but I really did not wish for it to happen. A good friend who knows someone there thought it would be a good idea, she is not the vindictive type so I am sure she did it as a favour.

Much like photography for me, there is only one side to be on when a video camera is being pointed somewhere, but this time I bit the bullet and let it be me on the other side.

The odd thing about this interview is that it may have possibly have, in a way,  been my own doing. At the beginning of the year I came up with an idea of photographing people who have made businesses at home or in private apartments and the main TV station here (TV3) started contacting people I had photographed for their own show.

Eventually BTV, it seems, decided to do something similar but not wanting to go for the posher end of the market were on the look out for more humble abodes like mine, so in many ways I guess I was a victim of my own success.

The actual interview was as short, abrupt and as disorientating as a mugging, we had chatted for a while and then at some point I got ‘miked up’ and in no time it was over, I can recall nothing of what I said and have still not dared watch the link they sent me.

So much for fame, it really is not for me.