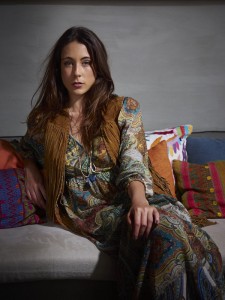 I have been running a film group in Barcelona for about 7 years, I do this because I love showing people films that they might not get to see and as it is situated in a cultural centre and there is also a great bar, so the whole evening is very sociable; people arrive early and leave late so they can chat and just hang-out.

One of the unexpected outcomes of hosting this event is that it is quite a  good networking tool, I never think of this when there, but slowly getting to know people over a period of time leads to a very natural way of connecting: slow networking if you like.

Anyway, I got to know a girl called Alessia, who is a stylist and blogger and we kind of fell into doing a shoot together.

I like doing fashion these days, much more than I used to in the past, but the usual problem is getting things organised and finding reliable models and collaborators.

I met up with Alessia a couple of times with a view to discussing this and admit that, having done a few shoots in the past I know often they can come to nothing. With Alessia however she was very much on the ball and before I knew it the whole thing was set-up and ready to go, what a luxury!

The actual shoot coincided with another one with a regular client I love working with (Barcelona Hair Academy), so it was a kind of frantic day.

I got to the location early enough to have something to eat and relax a little, which was great as we were doing this at a very cool restaurant on the beachfront called Gallitos, they were very kind to let us use their space and generally get in the way of the very efficient (and patient) staff. Also with us was Eneritz Rojas, who was doing hair and make-up, she did an amazing job and was a fun person to work with.

We planned to do maybe 4-5 different looks and we worked right up to sunset. Our model was Violeta, a real star, lots of class and no attitude, so a joy to work with, the only minor hitch during the shoot was the over-zealous security connected to the W Hotel who claimed some nondescript wall was actually their wall and private property… Really? It was as public a thoroughfare as I have ever seen… So a little cat and mouse fun ensued.