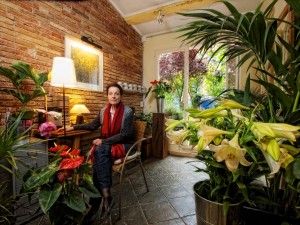 This was the last in a series about people who have created interesting spaces in apartments or other essentially non commercial spaces.

Flora’s kind if stretches this conceit a little because the actual space is an outhouse at the bottom of her garden.

I was late in photographing this place because it was still being finished when I first was there, So I had to wait till I had returned from my trip to Argentina. Also I have to be careful not to publish posts about articles that are to appear in magazines and this one was delayed quite a while.

She is a very interesting person, the history of her becoming a horticulturalist was one of dogged persistence in a world (late 60′s) where any real further education for women was rare and this particular field of study was strictly an all male preserve.

But she persisted and eventually got accepted and after working for a while in a department responsible for planting vegetation around public roads finally went into business for herself.

The latest project is this space which she wanted to be more than a simple florists shop, so here you can sit and drink coffee, even buy art and basically relax. Apart from the actual interior space there is also a lovely garden which connects it to the house, above the public area is a work shop which i thought merited photographing as well. During the Semana Santa she puts on a well known display alone the street where she is based displaying dozens of different types of roses.