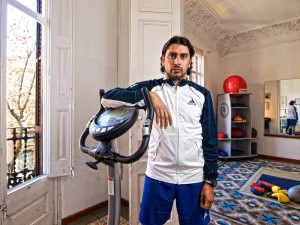 I have known Dany for quite a few months. We both go to the same boxing training class, run by Andrea Wheatley, who I got to know after photographing her for a magazine, that is another story you can read here, just click on the link.

Anyway, Dany is a really nice guy and he is another Argentine! I knew through our chats he was a personal trainer and had some kind of set-up in his apt. When I started thinking about a story of people who, not only work from home, but have people go there, I realised he was a possibility.

He has a lovely old apt that is divided between the personal space and rooms given over to clients.

This was my first shoot for this proposed project and I assumed it would just be interiors and was keen to utilise what I had learnt from the Ogilvy shoot and the wonderful critique of the images by my friend Yeesan.

When I had more or less finished I decided I ought to get one of  Dany in the environment and used a tripod which was actually a very good idea as I was able to get several exposure and later comp 2 different images; I had only taken one flash with me and was using it on him, but I soon realised the room behind would be too dark, so did a separate exposure for it.

I think I will make this a theme for all the other subjects, I also experimented a little in post-production and quite like a special contrast effect which pulls out a lot of detail and looks quasi-painterly.