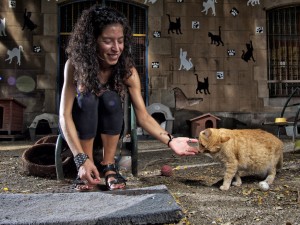 I don’t do so many articles for this magazine anymore, but I got called up to do this at short notice and being free said yes.

I know this little park quite well, situated at the back of the Boqueria market but, I suspect, not much visited or written about in guide books, it is pretty easy to miss, a lot of it is shielded and the canopy of trees and tranquility is hardly likely to catch the eye with all the other things going on around there. I met Alex and her mother who run the place and another guy who is a cat therapist/whisperer etc, etc. It is basically a sanctuary that, I believe, is donated by owners of the building it abuts.

I used to live in Buenos Aires and near my apt was a park called Botanico which was an unofficial cat sanctuary in a city overrun with dogs and dog-shit. The funny thing about this park was that there was lots of trees and lots of grass and you could lie down with out the need to worry about lying on something smelly. It was situated between 2 very busy roads and though not so large, once within its iron fence it was surprisingly quiet and peaceful.

When the sun sets the cats would all come out and sit facing the dying rays, it was vaguely surreal and in stark contrast to the mayhem on the streets and roads outside.

El Jardinet Dels Gats has a hint of this atmosphere and though most of the cats were far less friendly or trusting than in the park it is nice to get away from the monopoly of pooches that rules Barcelona.