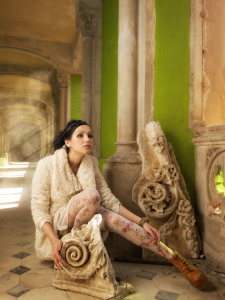 ¨There is a derelict mansion in Alella, near Barcelona, called El Torre Del Gobernador, it is a labyrinth of rooms and corridors, some painted, vivid, with an obsession for ornament and detail, that is splendid, bordering on vulgar. There are fairy-tail turrets of glazed tiles fit for a Disneyland princess and here is where I photographed Mad, my sometime muse, a multi-undisciplined artist and radio DJ¨.

This was the blurb I added to my Vimity portfolio last night, after one too many cocktails, I wanted to enter it for their competition and I thought a back-story might be fun.

The place is amazing, we first went there last Sunday, but Roger, Mad´s friend, and the guy with a car, was having problems with a lunatic ex-girlfriend that somehow ended up involving the police. We got there quite late and had to be back home at 8pm so we had about 2 hours in which we got 3 different shots done, it did not help that I was having trouble with my radio triggers so was limited in what I could do.

I was quite pleased with the images I had and we talked about possibly returning, as it turned out, the national day of strike action helped me out as both Mad & Roger were free, so off we set to have another go. We had maybe 7 hours and the quality of the images are much better (even the radio slaves behaved) I am pleased with the result and everything post shoot was done quickly thus not giving me a chance to get bored or distracted, it also helped that I really have very little post-production to do, everything that came out of the camera was good enough to show as it was I think. a special thank you to Roger for driving us and being very chilled and patient, in the shot above he is actually hid behind the column throwing dust in to the air to get that effect with the suns rays, we all got pretty grubby and getting home for a shower was a great.