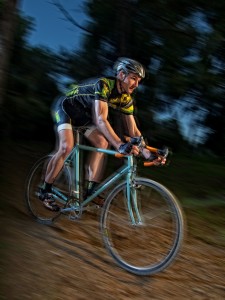 This photo is an example of me having an idea in my head and striving to make it real. I have probably said before, that one does not do these interview pieces for the money, but they, at least, give you pretty much free reign to do as you please.

I had an image of this shot in my head and basically I nailed it.

I needed the ambient light to be close to sunset to paint in the background and then i used 3 flashes to get the effect I wanted, I had quite a lot of gels on the 2 main lights which was set up co axially at a point that Collis would cycle through pretty fast, on the camera I had a ring flash to add some fill. Doing a shot like this means you get one shot each time he passes so timing is pretty important, I prefer to work like this anyway, having a motor drive going always makes me uncomfortable as it can run away with you and also I think there is some atavistic reaction from the analogue days of burning through too much film. This picture is not cropped and is one of quite a few that I would be happy to use in portfolio.

One other thing to note is that this image was shot on a Saturday afternoon, I was suffering a bit of a hangover and had not really slept. I met him at Lesseps where I travelled to using Bicing, I had a lot of equipment but was determined to get some exercise after the excesses of the night before.

After the bike trip we then had a bit of a hike up to Parc Guell which was pretty painful in my state. The thing I have noticed before is that there is no better cure for a hang-over than activities, either physical or mental, that stop you thinking about how crap you feel. After all the hiking I then had to deal with the technical issues of this shoot and I am pleased with the result, this also works for colds and other ailments as well!