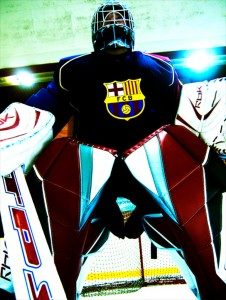 This was my first paid job as a photographer since coming to Spain. I had been to the magazine about some possible design work the month before and then got a call asking me if I wanted to do some pictures for them.

Ice hockey is fast and I had limited equipment but in the end got a lot of dynamic shots. I think I have a talent for predicting whats coming sometimes and I don’t like to rely on a motor drive to hopefully get ‘the moment’, I hate it when the camera runs away with you, be it with the metering or with some high speed burst mode, I feel like someone going down a steep hill in a car with no brakes.

I actually went back two times to photograph these guys, they were so friendly and I realised the training session would allow me to get more portrait type shots, the one here is not my favourite but a variation of it ended up on the cover, though it was supposed to be a minor story originally.