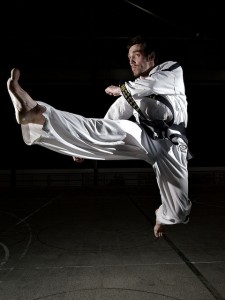 A trip into the countryside on a train.

I love travelling this way, especially longer journeys on proper trains that have good seats and tables, so much nicer than flying and the views are easier to be had as is getting up and wandering around.

I was photographing John for the Resident Magazine, I had know idea what to expect. I arrived during a tournament for local schools, it was a sports hall full of frenetic activity and people randomly (it seemed) getting together to beat the crap out of each other, and just as fast as a session began it would end; in short organised chaos.

When John was free we went to another big hall that was empty, it was a prefect spot as I had in mind a way to shoot this and it involved essentially everything in shadow expect for him whom I rightly assumed would be dressed in white.

I set up 2 flash more or less facing each other and gave him a spot to aim for. Due to recycle time I only took one shot of each jump, so it involved getting the timing perfect; it was surprisingly easy! Each time I assumed  I had missed the moment but not so, I maybe did around 60 shots of 60 jumps and almost all were usable and no shots have been cropped.

I love this kind of theatrical lighting and how it freezes everything and really shows the modelling of the fabric, very 3 dimensional.

I intend to use this style more often, I think for sports type shots it is perfect as you are not really looking for a soft beauty light but edges and angles.