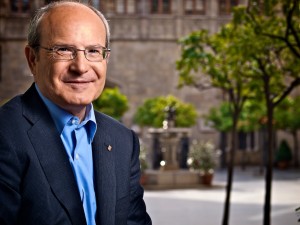 I got a call whilst cycling home from my boxing class with Andrea and it was from Xavier a member of my photography group (Barcelona Raw), he works for a design company.

They needed someone to photograph Mr Montilla the next day for his election campaign in October. The rest of the day consisted of a flurry of emails and phone calls arranging make up and general logistics. I was told they needed 2 or 3 images for the website and publicity and we had maybe an hour to do it.

What transpired was not what I expected, there were a lot of people, perhaps 3 designers from the company, plus Montilla’s retinue, including a handler and I was immediately reminded of Alastair Campbell and thought “uh oh, this could be interesting.”

They also wanted pictures. We went from 2 or 3 to something like 10.

Before I know it we are a group, made up of suits and scruffy creative types, darting around various location in the centre of town photographing him with Gothic steps, lamp posts and other street furniture; these suits were taking over the shoot and of course they did not understand that you need to take more than one photo, especially as I was using an off camera flash and umbrella (I managed to get Xavier to act as my carbon-based-life-form-light-stand). Time was running out and we still had to get the images for his website. We headed back to the Generalitat to do the interior shots.

The designers had bought some red material that was to be the backdrop, it was just about big enough and we got the image they required, we also managed to get one of him at the window with the interior terrace behind (pictured above), but the one shot I would of liked was not possible, the interiors of this palace are very impressive, I had been there once before photographing Anna Maria Reverté who plays the El Carillón and thought then it deserved another visit, hey ho, I guess it still does.