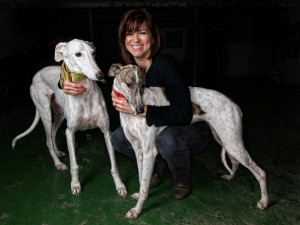 Los Galgos is Spanish for greyhounds and SOS Galgos is an organisation run by Anna Clement, from the veterinary practice she manages for her husband. The story of what really happens to greyhounds bred for sport is pretty sad; they are usually ‘put down’ after 2-3 years of racing. I recommend going to the site to learn more.

Anna is based outside of Barcelona and I had a relaxing journey using the trams than run along The Diagonal, these trams are a great way to get around, all the views of a bus and the convenience of the metro.

This was my first job since the getting back from New York and the Christmas holidays in the UK. Whilst in the US I had, of course, bought some new equipment, including a ring flash which I took along to this job, it probably is not a good idea to test new flashes during a shoot with very limited time and a pack of restless dogs, but what the hell. The ring flash was being used as a fill for a main flash and umbrella.

I hardly checked the images whilst shooting, after getting what I hoped was a close enough exposure (everything done in full manual), I was not expecting too much in truth, but once I had done some post production I was quite pleased with what I had.

I am hoping to go back and do some more photos as I am now going to treat most shoots as possible projects with an eye to getting them published again in other magazines etc.