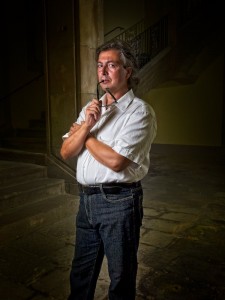 Paolo is one of those people you just get on with. I went there with an idea to experiment with a lighting effect that would give me an almost painterly effect; quasi Renaissance perhaps. As a result I fluffed around a little experimenting with different things, but Paolo was very patient and amenable.

I photographed him in the building where he is setting up a new company that will be  mounting productions, they have a nice sized space and a stage and I look forward to seeing productions there. I love the way it is situated in a quiet side street in El Born and from the outside you would have no idea just what was going on in there.

The effect I got was by using 2 lights on the same stand, one with a brolly and the other above with a warming gel on a bare head, for the background another was used to pick out the details of the stair case which I liked as it almost looks like a stage set. Unlike a stage set I could not control the comings and going of people, sure enough when you want to start taking pictures, your supposedly deserted location turns into Piccadilly Circus.

After the shoot we went for beer and pizza at a local place he knew and so started a new friendship which has involved a few dinners, parties and the occasional drunken night, once with him singing opera in the streets of Raval, much to the chagrin of certain uptight residents!

He also taught me the secret ingredient for the basic sauce in pastas; celery, who would have guessed, but it works!