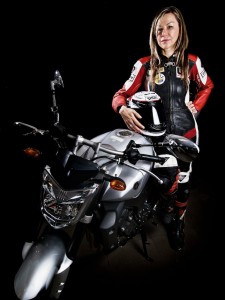 A possible interview piece, Britt got access to a motorbike shop Aprimoto because the owner (Josep Acriz) is a friend, he was also very helpful and patient, so a big thank you is merited.

Britt has ridden and raced professionally for many years and is considering doing some more now she is living here. She also has written articles for magazines reviewing bikes and we are thinking of possible collaborations in the future.

The usual technical problems with a shoot like this revolve around limited space, a very low ceiling and a showroom full of shiny reflective bikes and using flash that will always spill to a degree.

One likes to avoid as much post production as possible but this shoot did need some heavy vignetting to kill off all the distractions.

The first bike we considered was a dark blue and it just absorbed all the light so we switched to a silver one , but I also wanted to get some engine detail and a matt black finish on this one did not help; I only had 2 lights and used a brolly on one, when in fact an extra flash and grids may have been better, I however like to carry only as much I can manage on a bike as a rule for these jobs.

This was an interesting shoot for me as lighting motor bikes and cars is an art and really needs a lot of thought and some big lighting or great outdoor locations at dawn or dusk, but there are simple things to look out for, like the helmet, I realised whilst we worked that without the reflection in the visor the shot would look dead so one needed to keep checking its position. Quite a few otherwise good shots did not make the cut because the helmet had moved a fraction and lost the catch light and even this one is not perfect because in some it is a fuller strip than here, but in the end I preferred this for overall composition.