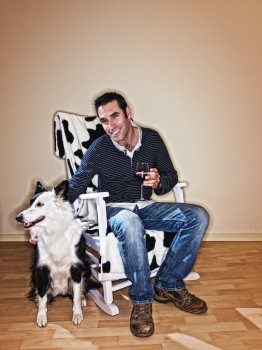 Joan works for a wine company as a taster. To get to his house I took the Bicing to what is the last stop in that direction, essentially Sarría, it is all up hill and with a heavy camera bag quite a challenge.

Once you are in the rarified world of this barrio you soon realise where the money is; they actually have houses here and private foreign schools.

Joan lives in a kind of bungalow at the end of a cul-de-sac, you enter a large security gate to find yourself in a world of vines and plants and, unfortunately, a haven for Tiger mosquitoes, I was as obsessed with killing the little devils as I was in getting the picture; they leave you with big welts and a bad itch almost the moment they touch you.

For this shot I wanted the dog to be in shot because A. He is mentioned in the text and B. I loved how he matched the throw on the seat.

The lighting could have been simple because there was so much natural stuff flooding the place, but after having hauled all my kit up those hills I was damned if I was not going to use it. The only thing I regret is that the fill which was a ring flash was a bit too strong and has left its distinctive shadow effect, especially around the dog.

I can just blame the mosquitoes for that lapse in concentration!