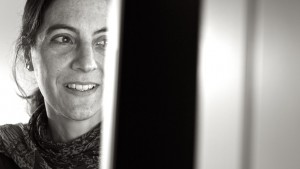 Here is an image I did for a personal project about artists and scientists. I imagined this would be a pretty straight forward project to do, as I had a clear idea of what I wanted and the style to shoot it.

This is not, however panning out quite as I imagined. One issue was maybe a slightly romanticised idea of what artists studios/workspaces would be like, attendant to this is the quality of the light, obviously people like Agnés use computers a lot, so don’t have a great need for beautiful diffuse northern light.

I won’t discuss the issues of photographing scientists here.

So, I may have to rethink how to shoot these portraits, maybe forgoing the natural for something much more stylised and controlled. I have done quite a few images like this in the past and I may post them to demonstrate what I mean.

Anyway, for now I put this image up because it’s a good one of Agnés, she’s a very nice person and I think it shows.