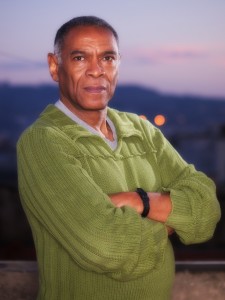 The problem for Eric was that I had it in mind to try out a new boom arm and hang a flash over him with a grid, using a ring flash as a fill if needs be. I also wanted to go for something very hard and gritty, paying little attention to what he was hoping for.

The end result was the first set of images and he was to say the least a bit shocked to see himself portrayed thus: hardened criminal, homeless person, world-weary-seen-it-all spectator, take your pick.

I was too caught up in what I wanted to do and ignored the fact that he was a really nice amiable guy who is none of the above.

So we arranged another shoot and again I tried something new, but this time more complementary to him and indeed more representative. Though the other images have a certain curiosity value and I did get to try out something new, they don’t really show Eric in a true light, the others do.

The moral I guess is to see what ‘it’ is and not what you want ‘it’ to be.