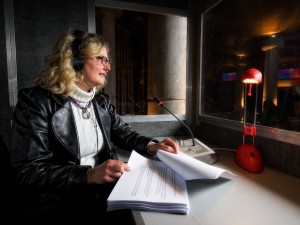 Mary is an interpreter, it is one of those jobs I find difficult to imagine being able to do,  to listen to someone talking constantly in one language and speak it pretty much at the same moment using another.

The Babel fish in Hitch Hikers Guide to the Galaxy would be my best bet, having people ask me to try and translate something being said by someone who does not pause to give you time is impossible.

She also seemed possessed with the patience of a saint; the combination of a tiny portable sound booth and scratched up plexiglass meant I was in there with her, very cosy.

I opted for a simple  light set up with a brolly and flash bounced off of it, placed outside, to give a more general light.

We started with her in just the white jumper which caught enough light (and maybe bounced some around as well) to not need a fill. Mary however wanted to use her leather jacket and I was a bit unsure as it would disappear into shadow without fill light.

In the end I found a solution by borrowing a large table cloth from the conference room and hanging it just out of view to camera left, it did just enough to give some separation and gave the jacket definition. The only other thing to do was make sure enough ambient light came through to give some atmosphere and context.