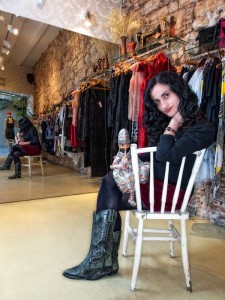 Barcelona, very much a tourist magnet and set up to entice them, she told me when she first set up shop there, over 10 years ago, it was very different, her street was a narrow little alley in a humble barrio, then they widened it and gentrified the place, she is not complaining, even if every other customer is just asking directions to the Picasso museum.

I did not really notice till I saw a shot on the back of the camera that she looked just like Penelope Cruz. It gave me a bit of a shock, a pleasant one obviously…

The set-up was a little tricky, as I wanted to get the mirror in to show the space, but because the shop was so narrow, keeping me and the main light out of view called for some uncomfortable positions and wedging the flash umbrella into a changing room that it kept trying to pop out of.

It also meant the angle of the key light was very acute to her (almost 45º), so I had to use a ring flash to fill the shadows, this then meant balancing the light, so it did not overexpose the white chair which was pretty close to the camera. I also had to arrange the clothes because the preponderance of black behind her meant she was not getting much separation; I took the few coloured ones on the rack and positioned them to delineate  her hair, which was an attractive feature.

We got there in the end.

She was a joy to photograph, very amenable to trying stuff out, I was thinking of putting some other images here but they are quite similar apart from some cool shoes and this one is the nicest of her I think, it should also be the one used in the article.