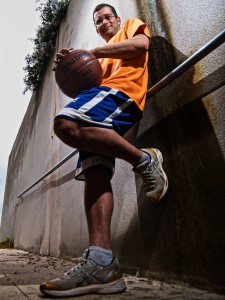 Rafel is a journalist and television sports presenter for TV3, I got to know him through his girlfriend Maysa and I suggested he would make an interesting interviewee to the magazine.

We had talked about doing some informal photos, he likes to play basketball and so we had an idea of him doing some shots on a court… However, a combination of really bad weather (rain and strong winds) and me suffering a nasty cold/bug, meant we kept it simple, I was going to have lights on stands which without weights or assistants is very risky.

I thought to photograph him against a simple concrete wall where he lives but then found this location nearby and rather liked the quality of urban decay . This shot is one I took more for myself than for the actual interview page as it makes no concession to run-around text.

The set up is with 2 flashes, one bare from high above and another over my right shoulder with a grid. I also did a little work in Aperture 3 using Niks color effects pro software.