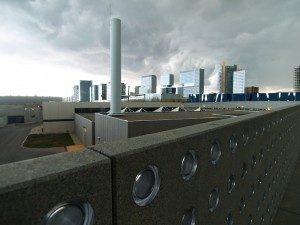 This trip to The Forum was with Naomi whom I am was teaching some photographic techniques to, we had done various theory classes and also shooting portraits with flash etc.

I knew she had a certain reticence towards the idea of photographing modern architecture and I had persisted in suggesting it was an interesting thing to do. In the end she, I believe, pushed to go to The Forum, maybe because I had taken my photography group there the year before with good results.

I think it is a great place to do find images, initially I was not so enthusiastic, thinking I had already been there and had it covered. Then I realised this was effectively a class so maybe what I wanted was not paramount!

So we headed off on a nice day and whilst pointing things out also got some pictures for myself.

The weather soon began to change and this storm front rolled in from inland in a very dramatic manner, I saw the clouds forming over the coast while the sun was still reflecting off the edifices and realised we had a brief window of opportunity to capture some spectacular shoots, anyone who loves photography must know that zone you get into when everything is just perfect.

I love the strange effect of the light in these images, there was very little post-production beyond maybe some sharpening and levels/curves adjustments (a given when shooting raw). I think in the end Naomi, I believe found it an interesting experience and if not a fan at least recognises the potential for interesting photography.